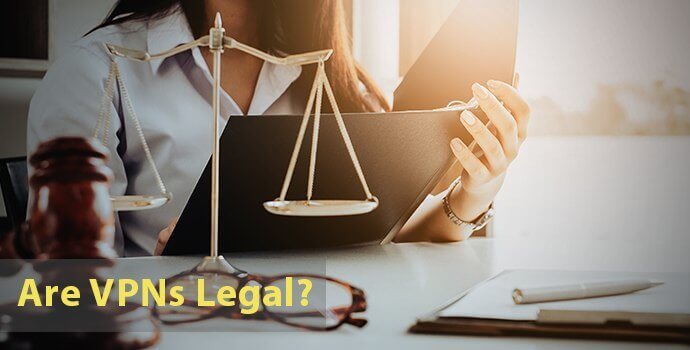 VPNs have been in use for quite a while already. However, the question of whether they are legal still arises in the depths of the Internet. And this is not surprising since sometimes virtual private networks are exploited for illegal purposes. But if you don’t do anything that violates the law using a VPN is legal in the majority of countries. Still curious who might need to hide if they don’t do anything illegal? Well, there are, for instance, journalists who describe sensitive topics and prefer to stay anonymous for security reasons. Or people that go online from public places where personal data can be stolen easily. The primary objective of virtual private networks was to allow employees of big corporations to work remotely and securely. It has become even more critical today since many companies are willing to help their staff keep life&work balance and thus, they allow people to work from home or any other convenient place. Some people want to use a VPN to access geo-restricted content of their home country when they travel. For instance, if you leave the US, you may want to enjoy Netflix or Hulu wherever you go. That can be done through servers located in the US. Even though Netflix hates VPNs and does all it can to block them. Once again, there is nothing illegal in using a VPN for legal purposes. But if you decide to use VPN to sell drugs, spread malware or get involved in any other activity which violates the law, the chances are that one day you will be in trouble.

A VPN is a great way to remain anonymous whatever you do online. Many users seek a best free VPN for torrenting which will give them a tremendous torrenting experience without revealing their identity. So, the logical question is whether torrenting is legal considering that so many people prefer to hide in the VPN tunnel while torrenting. The answer to that question is similar to what we have already said about VPNs. Torrenting is legal if you don’t violate the law. And by that, we mean downloading copyrighted materials without authorization. If you use torrents to enjoy content which is not copyrighted, you don’t do anything bad. Although the majority of countries have similar legislation to protect intellectual property, not all of them take serious steps to prosecute those who violate the law. There were hardly any cases when people got in trouble because of torrenting copyrighted materials. Most likely, no one will care if you use the content for your personal use. But if you are torrenting the copyrighted material for commercial and mass distribution, this is a strong reason for surveillance agencies to interfere. Note that some trackers operate in the legal grey area and you may torrent unsanctioned content without even knowing that. Also, your ISP should be watching all the traffic, and they are supposed to take action if they catch you torrenting illegal materials. Plus, if you live in a country where the government checks torrent networks, you might get in trouble too. If you don’t want to give up torrenting but prefer not to sweat over each video you download, consider using a VPN. That is your only way to torrent anonymously and hide from your ISP, government agencies and whoever who can be snooping on you.

Where VPNs are banned?

So, VPNs are legal in the majority of places in the world. But there are countries which do all they can to restrict VPNs. Usually, such bans are a part of a broader censorship program. Here is the list to get the idea: China. Even though using a VPN is illegal in China, VPNs still can operate here if they get a license from the government. But the terms and conditions are so strict that there is no sense of obtaining a permit. Russia. The country has banned VPNs but not all of them. The ones that comply with the Russian censorship restrictions may operate in the country. Plus, there is a blacklist of websites (updated regularly), and none of the VPNs are allowed to give access to those. Some VPNs are blacklisted as well. Belarus. The country prohibited Tor and VPN several years ago. The reason is simple: the government doesn’t want anyone to hide their identity while browsing the Internet. The paradox is that VPNs are still widely used in the country. Iraq. The government had to ban VPNs for security reasons. That is one of the ways to fight ISIS. Too bad ordinary people suffer from the limitation. Turkey. The reasons for the Turkish government to restrict VPN lays in its desire to control the usage of social media. Hard to say whether the step is effective though. The country’s citizens keep on using VPN. Iran. That is another country that tries to resist social media and such channels like YouTube. Restricting VPNs is one of the ways they do it. Citizens may use the VPNs allowed by the government, but they are useless. UAE. For UAE, ban on VPNs is a matter of protecting their telecommunications industry which suffers from VOIP services. North Korea. The country is known for its censorship. It would not allow its overseas workers including diplomats to use the Internet when they leave the country. However, it is not clear whether VPNs are allowed there because different reports provide contradictory information. Oman. VPNs here are not illegal, but the government does all it can to put restrictions on them. The country would not allow its citizens any freedom of speech, so it is logical that VPNs do not fit such an environment. Turkmenistan. Although there is no direct ban on VPNs, there were reports that the government blocks VPN websites. The country has a very severe censorship policy so no wonder you can’t hide your identity there.desire to control the usage of social media. Hard to say whether the step is effective though. The country’s citizens keep on using VPN.